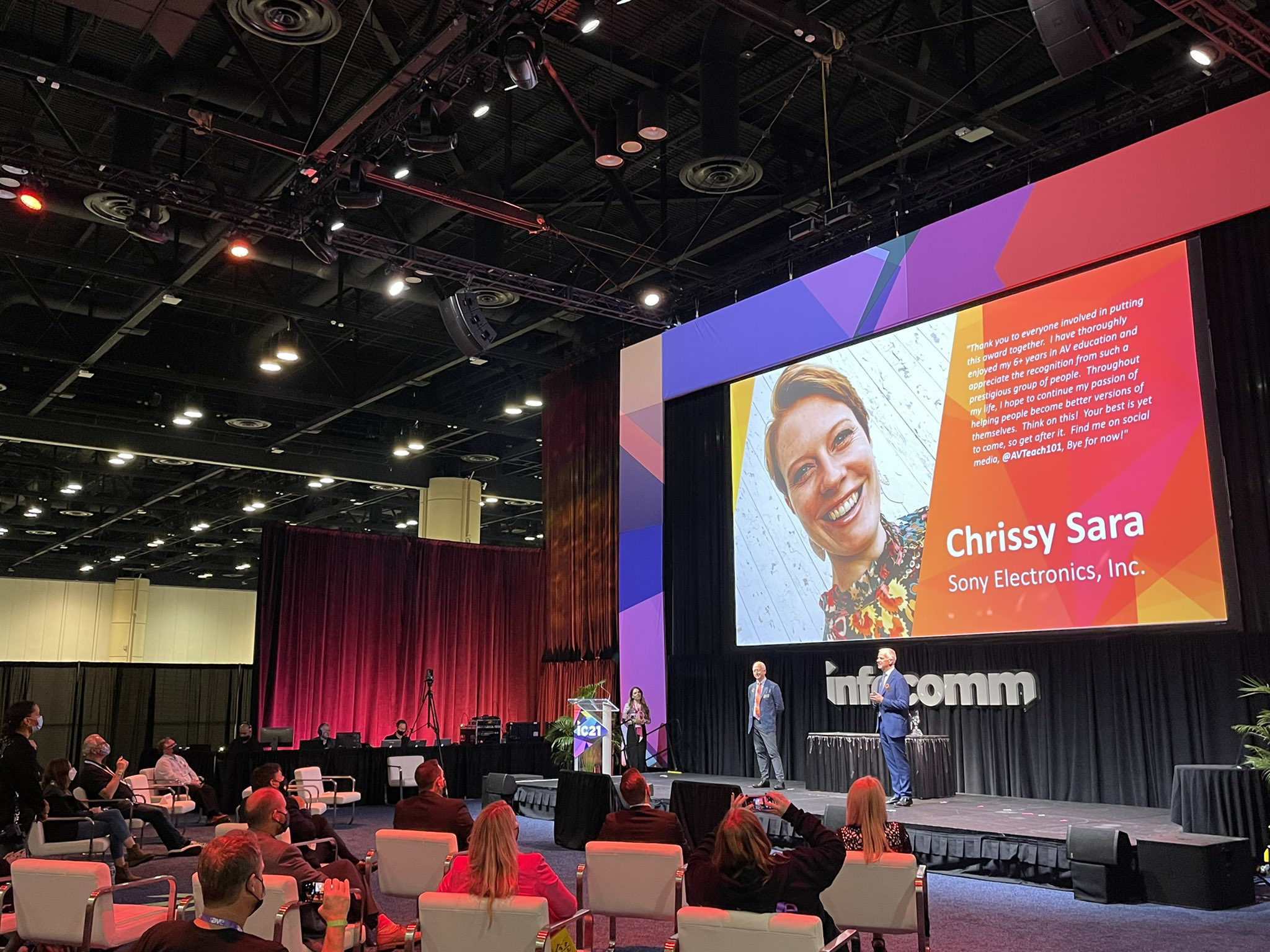 During an awards ceremony at InfoComm 2021 on Thurs., Oct. 28, at the Orange County Convention Center, the Audiovisual and Integrated Experience Association (AVIXA) announced the winners of the 2021 AV Professional Awards.

During an awards ceremony at InfoComm 2021 on Thurs., Oct. 28, at the Orange County Convention Center, the Audiovisual and Integrated Experience Association (AVIXA) announced the winners of the 2021 AV Professional Awards.

The AVIXA Awards recognize outstanding AV professionals for their contributions to the industry. Members of the pro AV industry nominate individuals for the Adele De Berri Pioneers of AV, CTS Holder of the Year, Educator of the Year, Event Design Professional of the Year, Mackey Baron Distinguished Achievement, Women in AV, and Young AV Professional awards. The Harald Thiel Volunteer of the Year Award is bestowed by AVIXA staff.

“The pro AV industry is full of dedicated, passionate, and talented minds,” said David Labuskes, CTS, CAE, RCDD; CEO of AVIXA. “Each year, AVIXA has the privilege of shining a spotlight on individuals that are making strong impacts on their peers, companies, and the industry as a whole. They are inventors, educators, mentors, and leaders. And now I’m honoured to call them AV Professional Award winners.”

Cory Schaeffer co-founded Listen Technologies in 1998 and was instrumental in growing the company into a leading brand of assistive listening systems. She holds two patents for her contributions to the ListenPoint product line, which revolutionized the concept of a "complete audio infrastructure" system for small to mid-sized rooms. Schaeffer served a four-year term on AVIXA’s Board of Directors and leads the AVIXA Women’s Council Southern California Group.

Kelly Perkins has built her 15-year career on educating and promoting the audiovisual industry. She earned her CTS in 2009 and launched an internal company training program to facilitate and encourage others to earn their certifications. She is also the architect of NSCA’s Ignite program, which connects students and schools to the AV industry.

Jennifer Goodyer is very active with the AVIXA Women’s Council and founded the South Florida AVIXA Women’s Council Local Group as well as its book club. Goodyer serves on the council’s Global Onboarding Committee, and STEM Outreach and marketing sub-committees. Her involvement motivated her to earn her CTS, the first in her company. She then began educating manufacturers on the benefits and spearheaded offering CTS education to their customers and employees.

Chrissy Sara is the first woman to conduct AVIXA’s CTS and CTS-I certification courses. She is a spirited instructor and passionate supporter of the CTS program and those in pursuit of it. A dedicated volunteer, she teaches a CTS study group, providing resources and continuous encouragement.

Matt Wellin’s AV career has spanned more than two decades. Today, as a project manager at AV Chicago, he led the 2021 Chicago Neighborhood Development Awards, a true hybrid event hosted for 50 local attendees and livestreamed to thousands. In this project, Wellin focused on the clients’ desire to not only expand viewership through streaming technologies but to bring a sense of community by organizing live remote watch parties at award-winning locations.

Juan Jose Vila started collaborating with AVIXA in 2016 and helped introduce the association in Spain. He promoted the advantages of CTS certifications and collaborated in the implementation of the AV Technologist (AVT) Challenge throughout the country. He also regularly presents to students on careers in the AV industry as well as supporting many AVIXA initiatives in Iberia and Latin America.

Fred Bargetzi, a 30-year Crestron veteran, was instrumental in guiding the evolution of the pro AV industry into the world of digital transformation and IoT through his leadership and technology invention. When he started his career at Crestron in 1990, the company produced hard-button panels and monochromatic touch panels. Under Bargetzi’s leadership, the control industry blossomed to its current state of control via many devices including personal devices. Bargetzi’s name is on 22 patents that have defined the pro AV industry’s transformation from analog to digital, such as control via ethernet (e-Control).
‍

Brandy Alvarado-Miranda is the Chair of the AVIXA Women’s Council and began the council’s local groups. She is passionate about the AV industry and giving women in the industry an equal opportunity at the table. Her inspiration comes from a number of positive mentors she’s had in her career.

Melissa Baglio began her career touring on Broadway, becoming a master electrician and leading an all-female team. An advocate for industry standards, she has initiated training programs for staff and freelancers. Baglio is motivated by empowering women, introducing young professionals to opportunities in technology, and helping to make the AV industry inclusive and a better environment for people from all backgrounds.