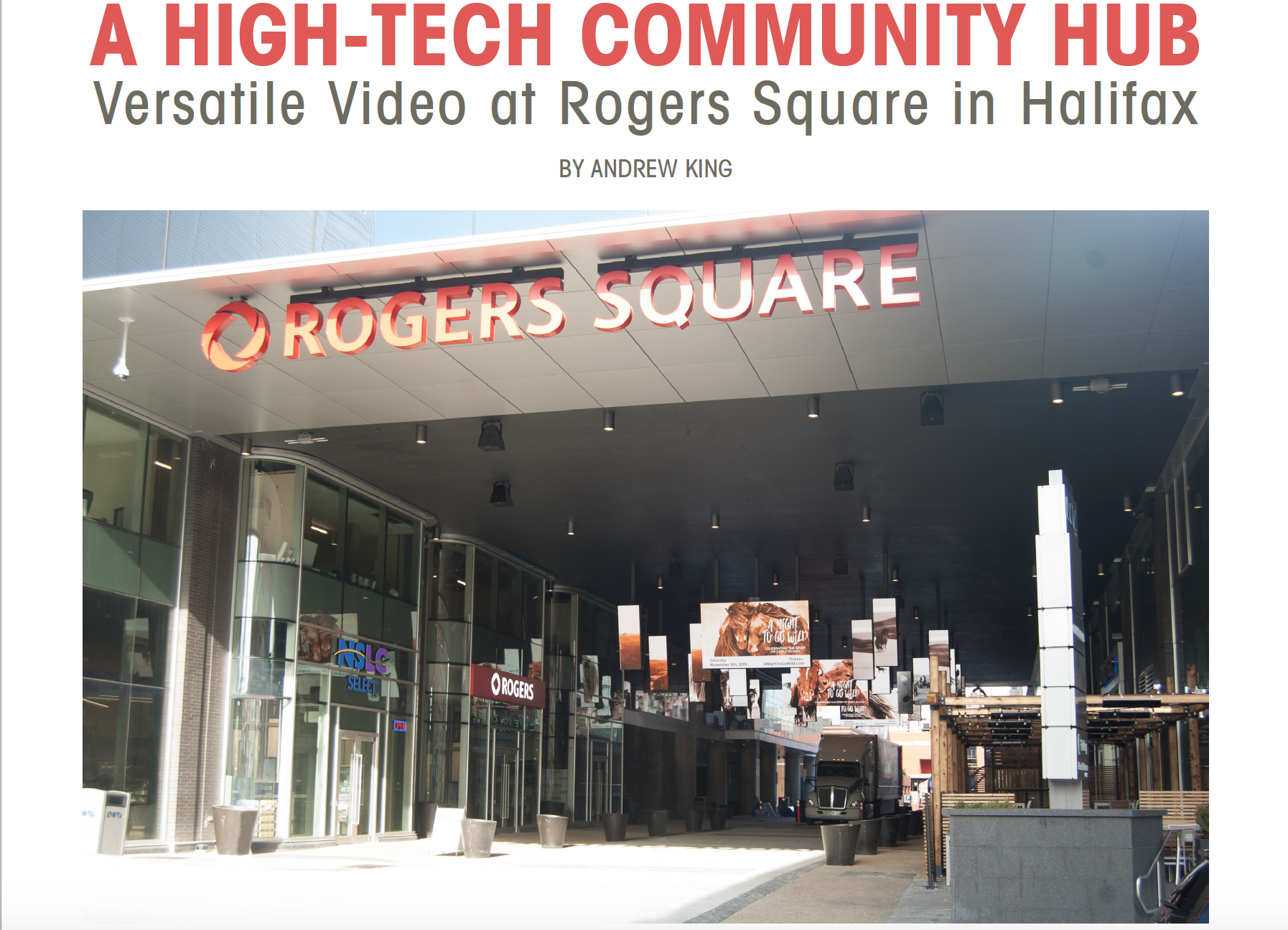 This article originally appeared in the Winter 2019 issue of Professional Lighting & Production magazine.

When the Toronto Raptors were amidst their historic run for the NBA Championship in late spring 2019, it was informally dubbed “Jurassic Park East” and welcomed thousands of hoops fans for live viewing parties. Later in the fall, it hosted a packed all-ages show with American rapper YBN Cordae as one of the marquee events of the 2019 Hopscotch Arts Festival. And even outside of special events, it gives plenty of passersby in Halifax’s bustling downtown core a cool, out-of-the-ordinary multimedia experience during their daily commutes.

It’s called Rogers Square, an 18,000-sq.-ft. covered, open-air community hub housed right in the middle of the brand-new Nova Centre in the heart of downtown Halifax. It can welcome over 2,000 people for special events like concerts, festivals, sports viewing parties, and a lot more, with an open invitation to local organizations and community groups who want to take advantage of its amenities.

Those amenities include an innovative, high-tech video system comprised of multiple screens with countless potential configurations for a myriad of applications – particularly fitting considering the Nova Centre’s billing as “Atlantic Canada’s most technologically- connected commercial building” and Rogers’ status as a Canadian communications and multimedia juggernaut.

“Halifax is a hub of innovation, technology, and creativity in Atlantic Canada and we are so pleased that Rogers is investing in our city through its partnership with the Nova Centre and by opening Rogers Square for all residents and visitors to enjoy,” commented Mike Savage, the mayor of Halifax, during its grand opening festivities.

Indeed, it seems those residents and visitors have been equally as pleased with much of the programming to have taken over the space in the time since, and the one-of-a-kind multimedia installation is a big reason why.

The Nova Centre is a 1 million-sq.-ft. mixed development that dominates a good-sized swath of downtown Halifax. It comprises the new Halifax Convention Centre, a pair of business towers, a soon-to-open Sutton Place hotel, retail and hospitality spaces, and underground parking lots in addition to the European-style shared street area that is Rogers Square.
The ambitious undertaking – the largest integrated development project in Nova Scotia’s history with an expected total cost exceeding $500 million – is being spearheaded by Argyle Developments, a locally-owned firm with an impressive portfolio of commercial, residential, and industrial properties in the Halifax Regional Municipality (HRM).

“When we started the project, we went through 12 public consultation sessions in Halifax,” begins Argyle Developments CEO Joe Ramia. “One of the things that kept coming back was, with a project of this size, they wanted to see a space where Nova Scotians could connect with each other and connect with the world.”

While approximately 60 per cent of the Nova Centre’s total space will be publicly- accessible, Ramia explains they wanted to deliver a purpose-built gathering space to spur those connections and ultimately “showcase what Nova Scotia has to offer” through its programming, amenities, and more.

As they began conceptualizing how that space might take shape, a video-based centrepiece emerged as a hallmark idea. Initially, they considered a large LED surface on the ceiling and went so far as to produce some architectural renderings of how that component would look in the space.

Months later, though, Ramia and his team were in Germany on business and saw a more artistic, abstract-looking installation of scattered vertical video screens – one that could be manipulated and configured in a myriad of ways based on the content it was relaying, the viewers’ vantage points, and other variables. Its content was mostly limited to artistic images, but Ramia and his team recognized the potential to take it even further.

“That’s when we brought the idea and our vision to the table with Westbury to see if it was something we could achieve,” Ramia shares.

Based in Toronto, Westbury National is one of Canada’s biggest and best-known professional AV integration and event production companies and was tapped as the AV design firm for the Halifax Convention Centre and some associated spaces. In addition to the various integrated systems for that facility and its many meeting and event rooms – background and foreground audio systems, video and signage systems, distribution and networking, etc. – that included Rogers Square.

Later into the process, Westbury was also awarded the integration contract in partnership with Halifax-based AV specialists Backman Vidcom. Westbury oversaw project management and shared equipment supply with Backman, which handled the physical installation of components; however, that didn’t include Rogers Square, which Westbury managed solely with physical installation help from the centre’s staff.

“The original concept here was driven by Joe and his team, and we supported them through their discussions with input on what would be viable and what wouldn’t,” says David VanVeldhuisen, Westbury’s director of engineering, revisiting the meeting with Argyle executives upon their return from Germany with a clearer vision of how the video system might come together. VanVeldhuisen is actually based in Halifax, and interfaced closely with project lead Doug Wildeboer and their colleagues in Toronto throughout the process.

The system now occupying Rogers Square is comprised of two types of display surfaces: six large, horizontally-oriented screens with the common 16:9 aspect ratio installed in three back-to-back pairs running up the centre of the strip and 44 smaller vertically-oriented, back-to-back displays scattered – albeit not randomly – around their horizontal counterparts from 22 points. All are fed via a complement of 13 NovaStar MCTRL660 processors.

The larger displays with the familiar aspect ratio are intended to display the more “typical” content – live TV, IMAG from performances, etc. – while the horizontal screens are intended for support content, advertising, or more abstract and artistic pieces.

Of course, the system’s maximum visual impact is achieved when they’re all working in concert, and in fact, there are certain vantage points from which content mapped across all of the screens comes together as a singular 1920 x 1200-pixel canvas – “so you can actually have things move from screen to screen, and standing in the right place, it looks like it’s all one piece of video,” offers VanVeldhuisen.

All of the screens are comprised of Absen’s XD6 outdoor-rated, 640 x 960 mm video panels with a 6 mm pixel pitch – 10 each for the six horizontal screens and two each for the 44 vertical screens.

Explaining what informed the choice of that particular product, VanVeldhuisen says direct-view LED was the ideal solution for what they were trying to do in this particular environment, and that Absen’s reputation is well-earned in his and his company’s experience. There was also the benefit of overall energy efficiency, which was an important consideration for every technical component as the Nova Centre aims to be LEED Gold-certified.

The package is driven via a Crestron control, switching, and routing system – a go-to platform for Westbury in a myriad of applications – anchored by a CP3N networked automation processor. A TSW-1060-B-S 10.4-in. touch panel resides in a rack room in one of the office towers to easily configure and preview a show, and then a Microsoft Surface Go loaded with Crestron’s XPanel software offers remote control from anywhere in the vicinity. Westbury’s Senior Field Engineer, Tyler Gardiner, headed up system programming.

As for inputs, the system is usually fed custom content via Brightsign digital signage players, with other options being a basic Rogers cable box and a Crestron 4K HDMI-over-HDBaseT extender that accepts video sources from the street level.

Similarly, the audio system welcomes inputs from a myriad of sources, and zoning and switching is as integral to its effectiveness. The system includes 12 JBL all-weather speakers suspended from the ceiling and boasts street-level inputs so that, as was the case with the Raptors viewing parties, an onsite DJ can take over the system during downtime from the live feed.

“A big advantage of the Brightsign units is that they’re not just digital signage players, but also powerful video engines where content can be manipulated in real- time,” VanVeldhuisen says – “and we got to put that to good use. When you see the content up on a monitor before it goes to the wall, it’s really clear how everything is laid out and will be displayed, and then you can get really creative with it.”

Case in point, VanVeldhuisen recalls meeting with Argyle’s appointed content creator and showing her around the platform. “From there, she was able to manipulate everything to produce some really cool video effects within the spatial aspects of the screens,” he recalls. “It shows that when you’ve got someone on the content side that gets it, it just opens up so many possibilities.”

He recalls another creative use during Halifax Burger Week in late March/early April when a local food truck set up in the square and was able to tie into the system with its menu options on the vertical screens and some mouthwatering imagery on the larger ones.

As for Ramia, he references the YBN Cordae show during Hopscotch 2019 as a personal highlight. “They did something phenomenal, where they connected the performance and all the screens together. We had a lot of people out for that and it was really special taking it all in.”

VanVeldhuisen adds that a key to being able to realize the full potential of these technologies and the system they comprise is support from the various suppliers. “It’s safe to say one of the big reasons we spec’d Absen was our relationship with [the brand’s Canadian distributor,] SC Media. They’ve got a great and knowledgeable team and solid backing from Absen, and their technical support was very helpful throughout the process.”

Ditto with NovaStar: “When we were having challenges with getting things mapped properly, [SC Media] got NovaStar on the line and we worked through it really quickly. The relationship with SC Media and, by extension, their brands, was key here. They’re interested in supporting this and making sure it’s exactly what we need it to be.”

Ramia speaks of Westbury with the same level of esteem. “We were happy to work with David, Doug, [VP of sales] Brock McGinnis, and the team at Westbury and very impressed with their professionalism,” he says. “We showed them what we wanted to accomplish and collaborated on how it would come together right down to the finest details – how should they be spaced? How are they interconnected so the content has the effect we want it to have? It was all incredibly smooth. They understood what we wanted and were able to give us exactly that.”

VanVeldhuisen responds in closing: “It helps when the client has such a clear vision, and they came up with some interesting ideas that we were able to flesh out together with some really great results.”

Those results are central to Rogers Square becoming “a crossroads where industry and culture flourish,” and based on the array of community-focused events to have happened there in just a few months, that seems like an apt description.

From sports to music to visual arts, there has been plenty on offer for visitors to Rogers Square and the larger Nova Centre, and that’s only going to grow as more people take advantage of this cool new space at their disposal – one purpose-built for the community and their biggest ideas.

GEAR AT A GLANCE